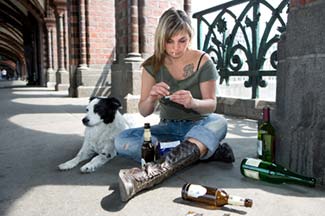 ABOVE: A cute dog has more earning power than the average Web freelancer does.

First, a disclaimer: There may be some Web publishers who pay decent fees to freelancers, but there aren't enough to go around--and most Web freelancers will tell you that low pay (or, in some cases, no pay) is the new norm.

Why? Publisher greed may be one reason, and business models that emphasize technology over content are another. (Venture capitalists love the idea of infinitely scalable sites built around "user-created content.") Still, even if a Web publisher isn't greedy and is willing hire writers, there are good reasons why pay for Web articles--and photos--usually ranges from poor to abysmal:

On the Web, as in newspaper and magazine publishing, most profits are earned through advertising. However, there's a difference in the way advertising is priced and bought in online media vs. print media.

On an "evergreen" travel-planning site, articles can earn residual income week after week, month after month, year after year. But unless the publisher wants to be a banker, it just isn't practical to shell out hundreds of dolars up front for an article that's likely to earn revenue slowly.

On the Web, publishers don't have monopolies.

Many corporate publishers aren't finding it easy to make the transition from the gravy days of print publishing to the more competitive World Wide Web. Some are limping along, while others are dying--and when publishers are hurting, freelance contributors will share their pain.

Next article: "Why Examiner.com and Suite101.com pay chicken feed"

This is only a preview. Your comment has not yet been posted.

The letters and numbers you entered did not match the image. Please try again.

As a final step before posting your comment, enter the letters and numbers you see in the image below. This prevents automated programs from posting comments.

Having trouble reading this image? View an alternate.

Comments are moderated, and will not appear until the author has approved them.

(Name is required. Email address will not be displayed with the comment.)