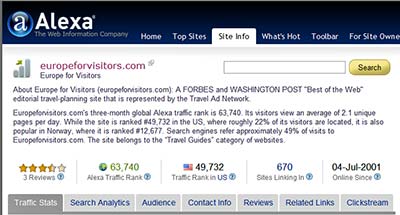 ABOVE: Alexa rankings and other data (with errors) for Europeforvisitors.com.

Alexa is a site that purports to rank Web sites according to their U.S. and global popularity. Alexa's rankings are controversial, and a page about Web statistics at Antezeta Marketing's Web site explains why:

"Data is collected through the Alexa Toolbar installed by those wishing to view site ranking data for competitor sites, rank the sites they visit, and more recently, perhaps due to incorporated anti-phishing tools. It not difficult to imagine that this self-selected community is comprised of web masters in the know looking to increase their own site’s ranking."

Our own rankings over the years have reflected the instability (and, in our opinion, unreliability) of Alexa's toolbar-based methodology: We've ranked anywhere from 12,000-13,000 to 50,000 or worse, despite traffic that has grown over the years. What's more, Alexa's search-engine referral data for Europeforvisitors.com and the date when our site launched are both incorrect.

If Alexa has any value, it's in letting prospective advertisers and PR people identify sites that have little or no traffic. When Alexa shows a ranking of 1 or 2 million or, worse still, "no data" for a site, it's likely that the site isn't much visited by travelers--or by anyone else.

Beyond that, Alexa's numbers should be viewed skeptically, because the difference between a site ranked 15,000 and a site ranked 50,000 could have more to do with the owners' use (or non-use) of the Alexa toolbar than with the sites' real-world popularity.