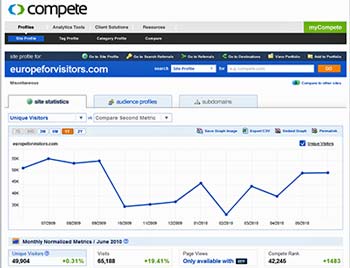 ABOVE: An off-the-wall traffic estimate from Compete.com.

Of all the major Web-analytics sites, Compete.com is the one that I trust least. The numbers that it shows for our site are far below the actual numbers reported by Google Analytics, even after allowing for the fact that Compete's estimates are for U.S. traffic only (a limitation that's buried in a FAQ).

Here's an example of how inaccurate Compete.com's statistics can be:

Other Compete.com data is equally suspect: Compete's "top search terms" for our site are at odds with keyword lists provided by Google Analytics and our server logs.

If you want to compare your site's traffic with that of other sites, don't rely on the numbers from Compete.com. You'll have better luck with "Quantified" statistics from Quantcast, which are accredited by the Media Research Council.